Text-messaging… it’s a huge part of our daily lives. And when it comes to dating, it’s an equally large part of the communication between a boyfriend and a girlfriend.

During your relationship you probably sent tens of thousands of texts back and forth to your lover. Little ones. Big long ones. Smiley emoticons and heavy sexting and everything in between. 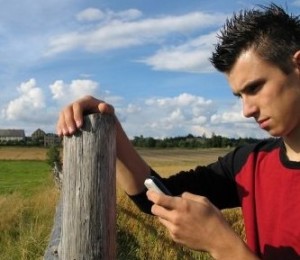 So when your boyfriend or girlfriend broke up with you, did you really expect it would all end? Did you think your ex would delete your number from his or her phone, and that would be it?

In reality, a lot of communication and text-messaging goes on these days POST-breakup. And that’s not just out of habit. Because if your ex is still texting you even after they’ve dumped you? If they’re still hammering out messages just for the sake of keeping in touch with you?

Your ex still has some level of feelings for you.

Think about it for a second. If your ex really wanted out, they’re already gone. They don’t have to text you. They don’t have to keep in touch. And yes, I know they’re doing it under the guise of “we’re still friends” or the dreaded “I just wanted to see how you’re doing”, but truth be told, this person is keeping those lines of communication open for some very simple and selfish reasons: they don’t want you going anywhere just yet.

No, if your ex still texts after dumping you it’s because they’re not 100% sure. They could be 70, 80, 90% sure… but that lingering doubt is what’s keeping them from cutting you loose and deleting your contact information from their phone altogether.

What to Do if Your Ex is Still Texting You

If you’re trying to get back together but your ex won’t budge, it’s still a great sign you’re getting these messages. Even better, you can USE these messages as a tool to not only draw them closer again, but to actually get them to want you back.

First, check out this crazy but cool video on EXACTLY what to do when you start receiving texts from an exboyfriend or exgirlfriend. It’ll teach you pretty much everything you need to know about sending and receiving text-based communication after your relationship has already ended.

Next, understand that TOO much communication at this point is bad. This is because your ex is relying on these texts to still get their “fix” of you. By entertaining entire conversations with them, you’re giving them exactly what they want. Moreover, exactly what they need to keep themselves level-headed and going forward with the breakup.

Your goal here should be to make your ex MISS you. You’ll want them to need to hear from you – to actually crave all the cute little conversations and back-and-forth stuff you used to do each night, every morning, and all throughout the day.

Other Signs Your Ex Still Might Love and Need You

And remember, text-messaging is only one of the bigger red flags that your former boyfriend or girlfriend isn’t yet over the relationship. There are lots of other signs too, and knowing what these are can really help nail the correct timing of the 6-step reconciliation process.

Ultimately, any time your ex wants to stay in touch it’s an indication of general interest. In all cases, play it cool. Don’t chase. If you let your ex initiate most of the conversations, the balance of power will shift slowly back in your favor. You never want to feel as if your communication is unwanted. If you find yourself asking the question “do I text him/her too much?” the answer is already ‘yes’.