My name is Sharon and I have been reading your relationship articles for a while now and they seem to help, but I am in a very strange situation with my ex and I was wondering if you can help me out.In the beginning of July my ex broke up with me because he told me that it was the right time to move on and to just remain friends. A week after he broke up with me I had sex with another guy.

A couple of days after my ex broke up with me he would still text me everyday and remained contact. A couple of weeks later we began to hang out a lot and started to discuss getting back together. I told him about the other guy that I hooked up with and he started crying and was very upset the next day he told me he was shocked and confused and very hurt because he told me he still had feelings for me when we broke up. Then he told me that he’s giving me the total green light to move on and that this would be the last time we were gunna talk.

I haven’t heard from him since then which was two weeks ago. I just shot him a text a couple of hours ago saying hey and he hasn’t responded. He’s a sensitive guy and I want to know from a guy’s pov how he is feeling and if I still have a chance. I still love him and I want him back terribly .. We been together for two and a half years on and off.

Sorry to hear about the problems you’ve been having. Your situation is fairly common, and your boyfriend is having some serious remorse over his stupid “move on and be friends” move, which backfired so hard it came back to bite him in the ass just a few weeks later.

“move on and to just remain friends” – The ‘just be friends’ part of this statement should’ve clued you in on his true intentions: he wanted you to wait around. Not saying you had any responsibility to sit back and wait around for him… you were certainly allowed to do whatever you wanted at that point. But what your boyfriend *expected* and what you actually *did* turned out to be two very different things. 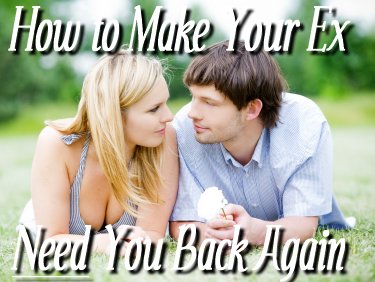 This guy wasn’t ready to let you go (and still might not be). He was having a “single moment”, where he wanted to see what else was out there for him. At the same time of course, he wanted you to stick around. Staying friends was his way of keeping tabs on you, so he’d know how hung up on him you might still be… and how much time he has to do what he wants. Ideally, he wanted you to stick by and twiddle your thumbs while he made some moves. And if those moves failed? There you were, all ready to take him back.

Instead, you went out and made you own moves. Your only mistake – in my opinion – was telling him about them. When you met up again and started discussing getting back together, you probably should’ve omitted the fact that you slept with another guy. Maybe you did it out of loneliness, a rebound fling, even a little bit of getting back at him for the breakup… whatever it was, you should’ve probably kept it to yourself. If he found out later, you could always tell him you lied to spare his feelings, and that the one-time sex meant nothing. And if he never found out? No harm done.

I don’t usually advocate lying about a relationship, but in truth you weren’t together at that point. What you did was YOUR business, not his. And yes, he might even have asked if you’d been with someone else, but you know what? It’s not his place to break up with you and then demand do know what you were doing while you were rejected, hurt, and alone.

Okay, I guess you want a solution.

At this point it’s tough, because he’s not going to get over the sex you had with this guy anytime soon. Your boyfriend is going to drill you for details (give him as little as possible), and re-hash the affair in his head over and over again. It’ll drive him crazy with jealousy, and it will make him bitter and angry. But at the same time, in the back of his mind he’ll know he brought this on himself for pulling the “let’s go on a break” stunt back at the beginning of July. Maybe you acted more quickly than most, but in the end, you really didn’t do anything wrong.

From a guy’s point of view, he CAN forgive you. It’s going to take him longer to forget. What you need to do is blow this whole thing off as almost meaningless whenever he brings it up. Tell him it was a one-shot deal, it wasn’t even that good, and you thought of him the whole time (even if you didn’t). Tell him this guy means nothing, and that if he wants to get back together you’re willing to give it a shot… but ONLY if he’s willing to forget what happened and NOT continually punish you for what he might consider cheating on him.

The worst thing you can do right now is apologize… even for ‘hurting him’. He hurt himself. You need to maintain a strong and firm stance on this, but at the same time be appreciative and gentle with his feelings. Tell him you totally understand how he’s feeling, and that you’d feel badly in the same scenario. But tell him at the time YOU were hurt, YOU were confused, and YOU sought some comfort in another guy’s arms during a very hard time. It had nothing to do with him, your relationship, or your future together.

That’s the best you can do, I’m afraid. If he hasn’t contacted you by now, I’d suggest you *completely* eliminate all calls, texts, emails, etc… He needs to wrap his head around what happened, but he also needs to realize he’s losing you if he doesn’t take a step forward in your direction. Chase him, and he’ll think he’s right and you’re wrong. But let him chase you, and it will be like he’s trying to get back something special he’s on the verge of losing – and this is what you want.

Also, there are ways of getting your ex boyfriend to call you. Check these out, some of them might help in getting him to make that first contact.

Good luck, and let me know how it turns out for you, okay?

Hey Anthony, just wanted to thank you so much for the advice! Its now going on three weeks with still no contact and I’m doing my absolute best by sticking strong to your disappearing from his radar method .. He still hasn’t contacted me either ..

I guess I shouldn’t worry because it has only been three weeks. I had been reading in one of your articles that usually it takes a good six weeks for them to possibly contact. What really scares me though is when the last time I herd from him he told me that he was giving me the total green light to move on and that he is really serious about never speaking to me again. I don’t know if he is just saying that because he was hurt or if he was really serious.

He is a pretty sensitive guy so I don’t really know how to take that statement it could probably go either way. I totally agree that I shouldn’t have told him about the sex with the other guy because it was my business only. I will totally keep you updated and let you know what goes on! Thanks again and keep safe from the hurricane, us long islanders are strong though well make it through LOL 😉