For every guy in a relationship there are three in the FRIEND ZONE. Three lost souls stuck in a hopeless limbo, unable to escape to that one magical place they never stop fantasizing about: the position of actually being the boyfriend.

For some people, the Friend Zone can come after a relationship. You’re dating some girl, things are going great (or so you think), and all of a sudden she hits you with those horrible, dreaded words: 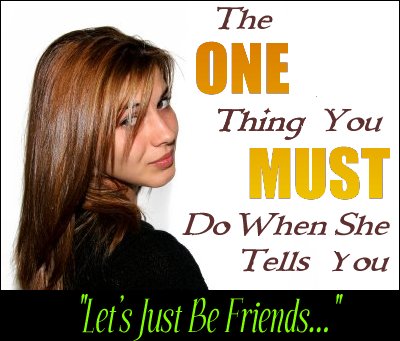 “I think we’d be better off as friends“

Your heart sinks. Your mouth tastes like you just swallowed a bottle of glue.

So how’d it happen? Could it be that all of a sudden she doesn’t ‘like’ you like that?

Were you boring? Were you lame? Was the sex not good? Exactly how the hell did you manage to get demoted from boyfriend status to someone who’s now “just a friend”?

The Two Main Reasons a Girl Will Friend-Zone You

Truth be told, there are only two big reasons a girl will pick you up and hurl you into the Friend Zone. The first one is obvious: she’s into someone else. There’s some other guy she’d like to date, or potentially like to try to date, and in order to do that she needs to be free of you.

“Friending” you could easily be a way for her to let you down easy. However, it could also be a way of keeping you ‘around’. It’s always nice to know someone still likes you, wants you, and would come back to you at any time. This gives her freedom. Choices. She can try to do something (or someone) better than you, and if it doesn’t work out? Well, there you are. That happy little “friend” she kept on the back burner for that rainy day.

The other reason a girl you’re dating will suddenly want friendship over a relationship is because you’re not being assertive as her boyfriend. In this case she’s friending you because you’re acting like a friend. You’re too passive, too wishy-washy. You’re acting less like her man and more like her ‘buddy’.

Check out this list and see if any of these things sound familiar:

If you’ve never dated this girl before, here are 3 big ways you can instantly escape the Friend Zone. And hey, you’re welcome.

But if you’re already in a relationship, and your girlfriend suddenly thinks you’d be “better off as friends”? Immediate and decisive action is necessary.

The only way to keep her is to turn her around. Change how she sees you, or how she thinks she sees you. So stop her mid-sentence. Grab her, kiss her, and tell her:

“I don’t want a friend. I want YOU. We’re good together, and there’s no planet in the universe where I can see us being ‘just friends’ with each other.”

It’s firm. It’s assertive. It’s a strong counter to what she’s trying to do. And if she persists? Tell her:

“I’m not going to apologize for wanting you as my girlfriend. You’re awesome. Too awesome to just be my friend. So either we date or we don’t date, and both options are cool with me. But I’m flat out telling you, there’s no middle ground.”

In most cases, your girlfriend won’t be ready for this. She’s looking to “try” the breakup out, almost like a gift she can return if she’s not happy with it. Instead, you’re giving her a no refunds policy. You’re telling her (not asking her) in no uncertain terms what’s going to happen next. In short, you’re taking the reins.

From there, you have your work cut out for you. Start being the guy she WANTS and not the all-too accommodating, girlfriend-worshipping pushover you have been. Step up your game. Take her places that give her no doubt in her mind that you are her boyfriend and nothing else.

Check out this list of traits women find attractive in men. As you start to exhibit them, you’ll find yourself much more successful – both in life, your job, and also with women – than you’ve ever been before.

And if you’re already ‘on a break’ or you’ve already agreed to be friends with your girlfriend? Check out this complete 6-step process on How to Win Her Back.