The road to getting back together can be long or short. Unfortunately, it can also be a marathon. 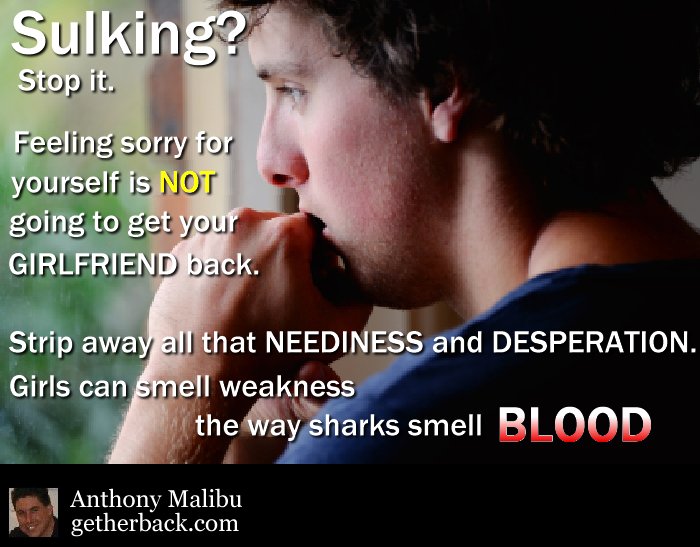 If you get too eager or too desperate, your actions can drive your girlfriend completely away. At best, she’ll be annoyed with you. At worst, it can change the way she sees you forever… in some very negative ways.

Again, fixing a breakup is often about what you don’t do. Some guys are so eager to take action – any kind of action – that they’ll trip over their own feet in an effort to fix things that aren’t even broken.

Below are a list of horrendous mistakes you can make while trying to convince a girlfriend to take you back. Make just a few of these blunders, and you’ll lose any shot you have of regaining your old relationship.

Some guys wear their heart on their sleeve. And you know what? Sappy movies, bad TV shows, and Cosmopolitan have done their level best to convince guys to be more emotional. That’s it’s okay to cry, or show their softer side, because girls LOVE that sort of thing.

But nope. Not after a breakup.

There’s no planet in this universe where pity actually works. All the crying in the world isn’t going to make her want you again, and in fact, it’ll make you look like a weak-willed douche. The kind of pansy ANY girl shies away from dating, because that type of person isn’t even a man. You’re a boy at best, crying and sulking and trying to trick your girlfriend into feeling sorry enough for you that she wants to end your pain by agreeing to go back out with you.

Sulking is the WORST thing you can do after a break. It’s a huge turnoff. Your friends, your family – maybe they’ll feel a bit sorry for you, but when it comes to your girlfriend you’re basically telling her “I am no longer boyfriend material.”

Getting Angry or Bitter About the Breakup

In this pathetic display of “strength” you launch a major offensive. Maybe even a verbal (or sometimes physical) tirade against all the wrongs and injustices your girlfriend committed during the course of your relationship.

And guess what? You come off as a crybaby. A bitter asshole she’s glad to be rid of. You’re exhibiting the exact immaturity she doesn’t want in a potential partner, and you’re justifying her decision to break up with you as the RIGHT decision.

You Threaten to Harm Yourself (or Worse, Your Girlfriend)

You shouldn’t be dumb enough to try this one, but I’ll talk about it anyway: YOU’LL NEVER FORCE YOUR GIRLFRIEND BACK INTO A RELATIONSHIP with threats of bodily harm, suicide, or any of that stupid baby bullshit. You’re throwing a tantrum and that’s all it is – that’s all it should ever get recognized for.

Yes you may be frustrated. Yes, it may seem like your girlfriend isn’t answering your calls or listening to your voicemails or responding to your text messages. But that’s fine. There are other ways of getting her to talk to you rather than threatening her, or yourself, with violence.

Never go this route when trying to get your ex back, even if you’re desperate. At best you look like a complete psychopath. At worst you’ll end up in jail, or with an ambulance called to your house by your exgirlfriend because you threatened to hurt yourself.

You Beg Your Girlfriend ‘For Another Chance’ and ‘Promise to Change’

Number one, your girlfriend doesn’t want to give your relationship another chance (at least right now). Number two, begging and pleading are wholly unattractive, especially to a woman, and especially when you’re trying to get that woman to consider you as her ‘man’ again.

A man doesn’t beg. He doesn’t plead. He doesn’t make lame-sounding promises that “things will be different”. A MAN actually walks AWAY after someone dumps him, as if hey, guess what? He’s going to be happier and better off without this person who rejected him anyway.

This sounds like callous macho bullshit, but in reality this is exactly what will turn your girlfriend around. Because the more you beg and plead and act like you actually did something wrong the more it makes you guilty. Guilty of what? Of anything, really. Doesn’t matter, because in looking ‘wrong’ about the relationship it ratifies your girlfriend’s decision to end things.

Positive Traits That Will Get Your Girlfriend Back

Now that you’ve learned what NOT to do after your girl breaks up with you, it’s time to learn what you can. Here’s a complete list of traits and behaviors women find attractive in men. Learn these well, and you’ll not only fix your breakup, but you’ll master the art of dealing with women as well.