When a relationship ends, one of two things can happen. Either you both walk your separate ways, or the two of you eventually decide give the romance a second chance. 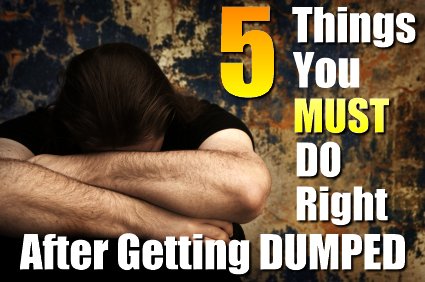 Now we all know people who have gotten back together. Couples who’ve broken up, missed each other, and ended up dating each other again.

When this happens, the reason is always the same: these people are still attracted to each other. They’d rather be together than apart, but most of all they still see value in each other.

Value in the relationship.

For this reason, what you do immediately AFTER your boyfriend or girlfriend dumps you is the single most important factor in deciding whether or not they’ll want you back. Your actions, your attitude – these are things your ex is paying VERY close attention to, as they help them determine whether or not dumping you was the right decision.

The Main Reasons People Don’t Get Back Together

When people don’t get back together it’s usually because the ‘dumper’ is totally turned off by the ‘dumpee’. They do and say things that end up driving their partner away, even while they believe these actions will make their ex miss, love, and need them again.

In truth, it’s very easy to drive your ex away. The days and weeks after any breakup are a very fragile time, and the very things you’re doing to try and get back together can often be responsible for making sure your ex NEVER wants to date you again.

So what actions are good? Which ones are bad?

How can you bring your ex back to you – physically and emotionally – without destroying their opinion of you and making it so that they don’t really want you back?

Below you’ll find five post-breakup moves that are not only safe, they’re actually CRUCIAL to reversing your breakup. Stick to these and you’ll never push your ex away; in fact, you’ll actually be drawing them emotionally closer by making them need you again, in many of the original ways you first fell in love.

#1) Don’t Fight Your Ex’s Decision to Break Up

It’s the first thing that happens after you get dumped; you FIGHT.

You fight against the breakup. You fight to “save the relationship”. You even fight to find out why your boyfriend or girlfriend suddenly decided to end things, even though their decision was probably not that sudden at all.

And as you continue demanding explanations and begging them to reconsider? You devalue yourself. As a person, a partner, a potential boyfriend or girlfriend… you’re showing your ex that no matter what happens from this point out, YOU need them a whole lot more than THEY need you.

NEWSFLASH: You’ll never convince your ex not to break up with you during the initial ‘break up’ speech. At best you’re delaying the inevitable. At worst you’re forcing them to see you in the worst possible light, at your worst possible moment.

#2) Show Willingness to Walk Away From the Relationship

Instead of fighting, you need to demonstrate STRENGTH. This is what your partner secretly wants anyway, and it may very well be the reason they’re no longer into you.

So DON’T fight. DON’T argue. DON’T throw yourself at your ex’s feet, promise to ‘change’, beg or plead for them to reconsider… instead of doing all those pitiful, awful things, get up and JUST WALK AWAY.

That’s it. It’s really that simple. By walking away after your ex dumps you you’re refusing to show your cards. In a way, your refusal to argue is actually the same as counter-rejecting them. And this puts you in a much better position later on.

EVERY SINGLE MINUTE that you fight the breakup slips you one step further AWAY from reconciliation. The longer you take to accept and agree, the further you slide down that slippery slope. With each second that ticks by you’re giving your ex that much more power over you. And this is power you’ll need later on, when it’s time to use these reconnection techniques to draw your ex back into a relationship again.

#3) Refuse to Chase After Your Ex

Once you walk away? That’s IT. You’re done with your ex boyfriend or girlfriend, at least for now.

Most people who get rejected end up chasing their ex in one way or the other. Whether it’s phone calls, text messages, or even just stalking your ex on their Instagram or Facebook accounts, this is probably the biggest of all possible blunders you can make (see this list of the 12 biggest breakup mistakes).

Chasing your ex looks desperate. It displays weakness, at a time when you need to be strong. It makes you seem needy, but more than that, it puts your ex up on a pedestal where even they start thinking they’re too good for you.

In addition, right after the breakup is when your boyfriend or girlfriend wants to see you the LEAST. Let’s face it, they dumped you because they’re sick of you, at least for now. So running after them at this point is only going to make them run harder, and since they’re the one with the head start you’re never going to catch them.

Eventually, if you do leave your ex alone for a while? They slowly begin to miss you again. They think about you MORE when you’re not around, and LESS when you’re constantly trying to get in touch with them. So by not chasing your ex you’re actually getting closer to catching them again. Just like by not chasing after a lost dog (which will only make it run away even faster) you can stop, kneel down, and let the puppy come to you.

Want your ex to really miss you? Well then you’ve got to totally disappear.

When I say totally, I mean just that. It’s not enough that you don’t call or text message your ex. You have to disappear from the world of social media as well.

Think about it; if your ex dumped you, they’re going to look back at you to see what you do. They want to know how you’re handling it, and checking your Facebook and Twitter and Instagram accounts is a very good, very secretive way of checking up on you.

Now imagine your ex goes to look at these things and they see nothing. No updates. No activity at all. Suddenly, they begin to worry. Because instead of running home to change your status or throwing up sappy song lyrics all over your page, you haven’t done ANYTHING at all.

To your ex, this can only mean one thing: you’re out with someone else. You’re doing other things, and you’re having fun and living your life without them. This is exactly the opposite of what your boyfriend or girlfriend wants. They expect you to be doing the same old thing, so when you’re not, it puts them out of their comfort zone.

#5) Immediately Move on With Your Life

And speaking of being out with someone else? This is the BEST time in the world to do just that.

When your ex dumps you, the greatest revenge is living well. This means going out, having fun, and most important of all, being seen with OTHER people.

So go out on dates. Enjoy yourself. Don’t even hesitate for a second thinking you ‘need time’ or that it’s simply ‘too soon’ after your last relationship ended. Remember: you got DUMPED. Which means that you’re the “loser” of the relationship and your ex (for now at least) is the “winner”. To reverse those roles, you’ve got to show your former boyfriend or girlfriend that you don’t care at all about them anymore. Even if you totally do.

And no, going out with someone doesn’t mean you have to marry them. You’re simply having fun; taking a few dates here and there to get back on the proverbial horse. There’s nothing at all wrong with seeing someone else, and it’s a great way to make your ex totally jealous. In some cases it can jar your ex into taking action, because until you actually start dating again your breakup might not be final in your ex’s eyes.

So to know how they really feel about you? Let your boyfriend or girlfriend see you with your arm around someone else. If that’s not going to prompt a phone call or text message, nothing else will.

There are a list of signs and signals your ex will give off when he or she wants you back. Look out for them, and make sure you’re doing the right thing immediately after the breakup.