Confused by the fact your ex boyfriend still texts you? Don’t be. This is one of the most common things that can happen after a breakup. 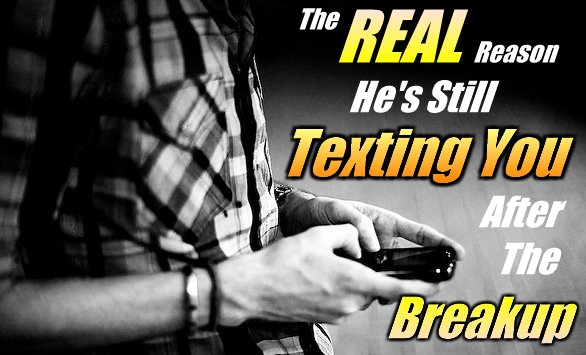 Look at it this way: if your ex is still sending texts beyond the day he broke up with you, chances are good he’s not 100% ready to let you go.

Any guy looking to ditch you forever is never going to do something that might be construed as leading you on.

Why? Because, to be brutally honest, he’s trying to get rid of you.

That’s why texting after a breakup is so important. It tells a lot about how your exboyfriend feels. It can also be a big indication as to whether or not he wants you back.

The first thing to look for are the 7 Signs He’s Still Interested. If you spot more than 3 of these, your relationship might be salvageable purely on the basis that you ex isn’t ready to move on.

It’s All About Control

First and foremost, text-messaging you is one way for your ex boyfriend to maintain control.

Yes, he broke up with you. Yes, you can “technically” do whatever you want. But as long as YOU think there’s still a chance of getting back together (and hell, you still want to get back together), you’re not going to screw that up by going out and dating someone else.

Your ex knows this. That’s why he’ll use text-messages as a method of control. A way of showing you just enough interest to keep stringing you along… but not enough interest that you’re back together as a couple.

It’s All About Spying on You

Texting you is also a way for your ex to keep you from seeing other people. Simple, seemingly-innocent texts such as “hey, what did you do today?” are actually your exboyfriend’s way of spying on you. He’s going to know if you’re out doing something he doesn’t want you to do. He’ll even use guilt texts to keep you from doing stuff, with the vague promise of “maybe one day… someday… we’ll get back together”.

Think about it. Has your ex said stuff like:

“We’re definitely meant to be together… maybe just not right now.”

This is because he’s stringing you along. He wants you to stay away so he can do what he wants (and possibly date other girls), but at the same time, he doesn’t want you to go away entirely.

In short, he wants to keep an eye on you. You know, just in case his next relationship fails… or he gets lovesick about your previous romance and suddenly wants you back.

What Does it Mean When he Drunk Texts You

There are two times when your former boyfriend is at his weakest: late at night when he’s alone, and when he’s drunk.

At night, being lonely, your ex will start reminiscing about the good times you shared together. He might send you a “hey” text message, or something more meaningful (and honest) like “thinking about you”. Either way, he is thinking about you. And if you want him back, that’s a good thing.

Drunk texts are a similar matter. When your ex is inebriated his guard is down. This allows his true feelings to come out; often he’ll suppress his real feelings and/or love for you because he’s trying to be “tough” or keep the breakup going. But when he’s drunk? That wall falls away, and his heart is a lot more exposed.

How to Handle it When Your Ex Boyfriend Texts You

If you don’t want your ex back? DON’T ANSWER HIM. Anything you do or say — no matter how innocent — will be construed as interest.

If you actually do want your ex back? DON’T ANSWER HIM! At least not right away. Creating space and unavailability is the first step in creating longing again. And you can’t get him back until he actually longs for an needs you.

Now, there’s also a step-by-step blueprint for Texting Your Ex Back. This is basically a series of text-messages you can send him that will, if you time it right, actually make him want YOU.

Learn about these texts if you’re interested in reversing your breakup. And remember, no matter what: texting after the breakup ALWAYS means something!