“I just want some space…”

Is that what he said? Or maybe he worded it differently. “Maybe we should take some time apart?” Or the dreaded: “I just need time to think?” 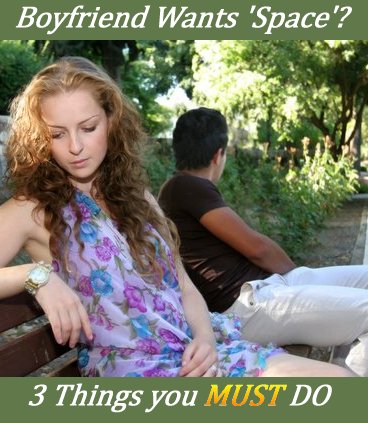 It doesn’t matter how your boyfriend said it, he always means the same thing: we’re about to break up.

Unless, of course, you know EXACTLY what to do.

So you begged. You pleaded. You told him you’d “change”. In the end you let him know that you really don’t want time apart, but if he really needs it, you’ll give it to him. Right?

Well, that’s about the worst possible thing you could’ve done.

Understand something: when a guy asks for “space” what he really wants is permission to date other girls. What he’s really saying here is “hey, stick around for a while and don’t go anywhere… but at the same time, I’m free to look for other people.”

If you’re not looking to break up with your boyfriend, and you want to get your relationship back on track? You’re going to need to do three things. Here they are:

Your boyfriend offers a time-out from your relationship, or needs space, or wants time to think… but rather than be the good little girlfriend who’s going to give him exactly that, you’re going to do the opposite. You tell him:

This is exactly what your guy doesn’t want to hear. The fact that he might lose you during the whole “time off” thing is going to freak him out, mainly because he thinks he can control you during this temporary breakup.

Putting your boyfriend on his back foot is the best way to make him realize you as VALUABLE. He’ll never be forced to really see you that way unless you respect yourself enough not to fall for this crap when he first pulls it.

Pre-Emptively Break Up with Him

At this point, the best thing to do is get pissed. Turn to him and say:

“Know what? If you’re really not sure about this whole thing, then I’m not either. Maybe we should just put an end to it completely, and both move on with our lives.”

This is going to scare your boyfriend right down to his balls. Why? Because he DOESN’T WANT THIS. He wanted a nice cushy little “break” where you kept calling and kept texting and kept telling him you loved him. Instead, you just broke up with him… throwing him for a complete loop.

Walk Away While You Have the Upper Hand

And after you tell him you want a breakup? WALK AWAY. Don’t look back, don’t answer your phone, and don’t respond to his text messages.

Your boyfriend will be left with the feeling that he really messed up. He screwed things big time, and he got exactly the opposite of what he wanted.

Most of all, he now stands to actually LOSE you. The fact that you’re not going to be his girlfriend anymore and he might lose you to someone else is going to create instant value in his eyes. Suddenly you’re a commodity he stands to be without, and he’s not going to want that.

Remember: your boyfriend doesn’t want a breakup. He wants a “temporary break”. This is a cowardly way of trying to keep stringing you along (which is what he wants), and now it just backfired in his face.

Now, if the whole “I need some space” thing already happened, and you missed your chance to do these three things? That’s okay. There’s still a backup plan.

First, look for the 7 signs he still loves you. These are easy-to-spot signals your boyfriend will give off when he’s really not ready to lose you.

Beyond that, there’s this One Opening Move guaranteed to make your ex almost immediately want you back! Make sure you do this one early though, because the longer you wait the harder it will be to pull it off.

In the end, NEVER accept the whole “I need space” excuse. Sitting around and waiting for your boyfriend to get back to you is almost always going to lead to a permanent breakup.