So you’re talking with your ex boyfriend. Seeing him. Maybe even sleeping with him as well. All signs point to a reconciliation, and you’re eagerly awaiting those awesome few words: “Will you be my girlfriend?” again. 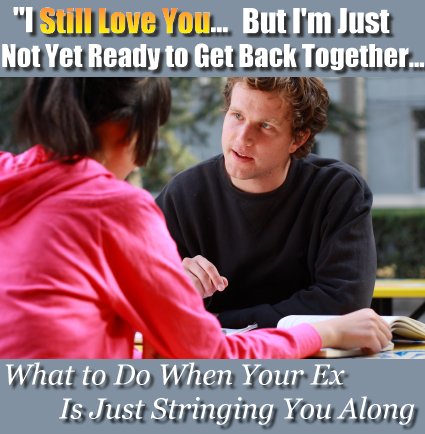 Instead, your ex avoids the question. He’s distant. Wishy-washy. So you ask him flat out where things are going, and your former boyfriend tells you:

“I still love you… but I’m just not ready for another relationship
right now.”

Now there are other ways he can word this too. Your ex might give you the “I’m still working on myself” line. Or he may string you along with “It’s too soon” or “Just give me some time.”

In all of those cases, he’s still with you. Still shows up to hang out with you. Still sleeps with you, and the sex is even better than before because now there’s a nasty, forbidden element to it.

So you wait… not-so-patiently. You’re happy with the contact, but you want more. Yet at the same time, you’re afraid of pushing your ex boyfriend too hard. As if pressing him for an answer might push him away for good, and you’ll lose him forever.

So what gives? Does he really want to be with you again? Or is your exboyfriend just giving you the blowoff… maybe stringing you along for as long as possible just so he can get a few extra weeks of post-breakup relationship (and post-breakup sex) with you?

The Real Reasons Your Ex Won’t Take You Back

First of all, if you’re trying to fix your breakup it’s always good thing that he’s still seeing you. At the same time, you can’t take everything he’s saying at face value. No matter what your ex says to you, his ultimate goal is his best interests. Meaning that he’s going to do what HE wants to do, and not just take you back for the sake of making you happy.

The good news is he’s not ready to lose you. He’s hanging onto your past relationship because he still feels emotionally connected. He’s probably torn; part of him wants a fresh start with someone else, but a bigger part of him wants to see if the two of you can actually work out.

The problem however, is that his actions are selfish. By telling you he loves you, he’s basically “locking you up” for now. He’s making sure you don’t go anywhere, while at the same time he’s free to do what he wants (and with who he wants). On top of that you might even be sleeping with him, which is like giving your ex everything he had when he was still dating you, but without the responsibilities of actually having to answer to you as a girlfriend.

And hey, guess what? While you sit there and do nothing? NOTHING WILL HAPPEN. Your former boyfriend isn’t going to alter the situation, because there’s no incentive for him to change anything. He has you; your companionship, your contact, your love and even your intimacy. What else does he really need? At this point, the title of boyfriend/girlfriend only serves to weigh him down.

Why Would My Ex Say That He Still Loves Me?

Two reasons. One, he really does still love you. His feelings for you are genuine, even if he hasn’t recommitted to a relationship yet.

But the other reason? It’s because he doesn’t want you to leave. He’s using the “I’m still in love with you” line as a way to keep you bound to him. It’s a tool he whips out whenever he feels you pulling away… whenever he feels like you might be getting fed up with his indecision, or tired of waiting. This is where he pours on the charm, and says all those things he knows you want to hear. And this, again, is selfish.

How Can I Get Him Back?

Again, the situation won’t change until YOU do something about it. So if you want your ex back? You’ll need to be proactive, rather than reactive, about the whole post-breakup situation.

Your first move is to create a void in his life. You do this by pulling away – as much as it might hurt right now. Only by making your boyfriend miss you can you actually create a need to have you as his girlfriend again. Only when he feels like he might lose you will he begin to evaluate you as a potential girlfriend rather than just ‘his ex’.

You can also use these bonding methods to strengthen past emotional attachments. By doing this, and by using the highlights of your past history together, you can mentally and emotionally bring your boyfriend back to the way things were at the beginning of your relationship. Accomplish this, and he’ll feel the same strong ties and attachments that made him want you as his girlfriend the first time around.

Ultimately, you never want to stay in this position too long. Being the “cool ex girlfriend” he can hang out with (and maybe sleep with) will eventually get you Friend-Zoned. And if you want this guy back as your boyfriend again? That’s absolutely the last thing you want.