The words are like getting stabbed in the gut with a rusty knife: 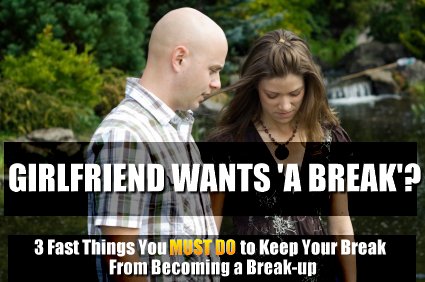 “I think maybe we should take a BREAK from each other…”

Your mind reels. The blood rushes to your head as you struggle for something to say.

And what do you even say to that? Your girlfriend is rejecting you. Hard. And not just in the traditional breakup sort of way, she’s actually demoting you to the lamest of all possible places in her life: she’s putting you on a shelf, to be dealt with ‘later on’ (or whenever she feels like it).

If your girlfriend wants to take a break, you’d better act fast. Any sort of inaction or complacency on your part will result in her continuing the break for as long as she wants. This, essentially, is like handing her all the power. You’re giving her the keys to your relationship and telling her she gets to drive.

Know what happens next? She drops you off. Or maybe she kicks you out of the car while it’s still moving. Either way, your girl isn’t likely to change the ‘break’ status anytime soon, as long as you’re peacefully and obediently going along with it like a good little boy.

What to Say When Your Girlfriend Wants Time Apart

“No, but thanks anyway. I don’t ‘do’ breaks. Breaks are bullshit.”

If you ever wonder why a girl would tell you she wants a break instead of a straight-up breakup, it really boils down to one thing: uncertainty. Your now ex-girlfriend is hedging her bets. She’s not 100% ready to let you go just yet, so she does the next best thing; she strings you along. She dangles the carrot of ‘maybe we’ll get back together’ in front of your face while she goes out and plays the field and decides whether or not she can find some other guy – some stronger guy – who makes her feel more wanted and loved and safe and secure than you do.

If your girlfriend springs the whole ‘time apart’ thing on you, it’s because you’ve been weak. Either you haven’t been fulfilling her needs, or you’ve been wishy-washy as a boyfriend in general. Maybe you’re insecure. Maybe you’re always apologizing for everything, or joking that you’re dating ‘out of your league’. All of these things will make a girl wonder why she’s with you in the first place. In short, you’re digging your own grave.

By denying her the break you’re delivering a message. You’re essentially rejecting her as much as she’s rejecting you. Because rather than scramble to get her back, or try to “fight” for the relationship (which is exactly what she wants), you’re crumpling the romance into a ball and casually tossing it over your shoulder.

She’s backpedaling. At which point you say:

“Yeah, no thanks. If we’re together, we’re TOGETHER. If we’re not, we’re not. I’m not doing things half-assed. I’m not going to sit around in some lame relationship limbo while waiting for you to figure things out.”

Keep in mind that when your girlfriend offers ‘a break’ the very first thing she expects is resistance. She wants you to fight. She wants to see how much you really do care. Begging, pleading – all of these things seem like they might help get her back, but in reality they’re only going to turn her off even more and ratify the decision she already made to distance herself from you.

Your girlfriend also wants you to talk her out of the break. At this point she won’t ever be talked out of it, but she wants to see you try. This is because when you’re groveling for her approval she’s suddenly in the position of being right (and you’re in the position of being instantly wrong). She assumes control. She’s using the break as a scare tactic to gauge your reaction, and most of all, to see if you’re worthy of actually dating her.

So yeah, it’s a test. A test of your manhood. Chase her, and you fail. Come up with 1,000 reasons you should stay together, and she’ll have 1,001 reasons you should be apart. It’s a game, really. And it’s not a game you can win, so you shouldn’t even be playing it.

What to Do if You’re Already on a Break

Now if this conversation already happened and you meekly “agreed” to take time apart? Well, you’re in trouble. Fortunately though, it’s never too late to fix this situation.

Your first move is to employ these counter-rejection techniques. DO THEM NOW, and don’t wait. They’ll get you immediately started on reversing the entire situation, and seizing back most of that power you already lost when you accepted her offer to ‘take a break’ from each other.

After that, it’s time to sack up. Figure out what you’ve been doing (or not doing) to drive her in the opposite direction, and rectify that situation as well. Check out these 4 huge mistakes most guys make when they feel like they’re losing control of their relationship. How many of them are you guilty of?

Ultimately, any ‘break’ will always become a breakup unless you DO SOMETHING about it. Sitting still won’t help. Waiting patiently, and hoping she’ll somehow come to her senses, is the worst possible move. Being proactive here is the most important thing you can do to keep your relationship alive and healthy. Being reactive, unfortunately, will always get you dumped.