Breaking up can sometimes seem like the end of the world. You don’t eat, you don’t sleep… you can’t even get out of bed because you miss your ex so much! 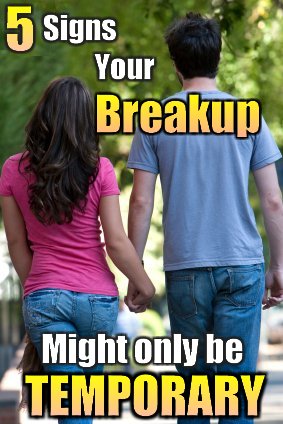 But then, only a few days or a week later? WHAM! You’re suddenly back together. All of that pain and drama was for nothing, and everything is right with the world again.

So how can you tell when your breakup is real?

Are there signs that your ex is really over you for good?

How can you spot the signals given off when your breakup is only going to be a temporary thing?

Below you’ll find 5 big signs that your ex isn’t truly finished with dating you. Recognizing and exploiting these signals can actually help you get back together sooner, rather than later, and reduce the risk of a permanent breakup.

1. Your Ex Keeps Texting You

Text-messaging shouldn’t just drop off after a breakup, it should end entirely. Because if your boyfriend or girlfriend is truly no longer interested? They’ll realize that texting you would only give you false hope.

Any kind of post-breakup contact is an indication of one or two things: interest or regret. Either your ex is still interested in what you’re doing (who you’re with, whether you’re going to start seeing other people, etc…) or they’re showing some regret for leaving you behind.

This goes no matter what your ex says in the text messages. They can claim the messages are innocent and mean nothing, but should know that they don’t.

2. Your Ex Wants to See You

Breaking up correctly is like ripping off a band-aid; it hurts a lot to do it quickly, but at least the pain is over fast. But an exboyfriend or exgirlfriend who insists on still seeing you, or even better, running into you by ‘accident’? That person is reconsidering the breakup altogether.

Long-term relationships can leave mental, emotional, and even physical connections behind. There is usually a NEED for that person, a void that’s left after they’re gone.

Even if they’re the one who initiated the break, your ex might be addicted to contact with you, in one form or another. Keep in mind that needing to see you is a definite sign that they’re not yet ready to call it quits.

3. Your Ex Wants to be Friends

Does your ex really want you as a friend? No. What they want is to continue part of the relationship; ideally, the part where they get to see what you’re doing and keep tabs on you while the decide whether or not they want you back.

Agreeing to be friends with your ex boyfriend or girlfriend will NEVER get them back. In fact, the best thing to do in such a situation is refuse to remain friends at all… then pull out these 3 amazing moves that will make your ex miss you – and need you back – almost immediately.

Friendship is always a bad choice. Stick around as ‘friends’ for too long and your ex will never get to see you as a potential partner again, eliminating any possible chance of reversing your breakup and getting back together. The LAST thing you want is to fall into the Friend Zone. Especially if you’re trying to fix things and win your lover back.

4. Your Ex is Trying to Make You Jealous

When you see your former boyfriend or girlfriend out partying, whooping it up, or even grinding up against someone new for your benefit? It’s because they know you’re going to get jealous and they WANT you to feel that emotion.

Jealousy is your ex’s way of sticking it to you. It’s his or her way of making you want to chase them. Taking you back is one thing. Getting you to come crawling back is quite another. Because if you do that? They can restart the relationship on their terms, which usually means they’re going to abuse your love for them.

5. Your Ex is Suddenly Nice to You Again

One of the biggest signs that a breakup might be a mistake is when your ex boyfriend or girlfriend starts acting the way they did at the beginning. You know what I’m talking about: back to right before you were dating, when the two of you were still trying to woo or impress each other.

Being apart can also offer clarity. You’ll see things differently when you’re apart than when you’re together every day. You’ll start to miss things. Regret things you might’ve said or done. This will lead you to want to be nice to your ex, which in turn, can get your head spinning with the idea of wanting to date them again.

What to Do if You Want Your Ex Back

Getting back together after an unwanted breakup is nothing more than a series of taking the right steps. The only problem? All too often, most people make all the wrong moves.

They do this out of frustration, out of anger, and out of loneliness. Worst of all, they do it without realizing it’s having exactly the opposite effect: it’s driving an ex away rather than drawing them closer.

First, make sure you’re not making any of the 7 Biggest Breakup Mistakes. Commit even a few of these, and you can kiss your relationship goodbye forever.

Second, check out the amazing guide The Magic of Making Up. Author and relationship expert T.W. Jackson gives you a step-by-step, foolproof plan for making an ex need you back in their life again, no matter how long it’s been since the breakup.